This article is updated version of Three-way git merging and meld and it was updated once again in 2015 (thanks to Eric Drechsel).

Although I am vim-lover, when it comes to git merging I use excellent tool called Meld instead of vim. It’s a GTK-based application written in Python and it has very nice capabilities of showing diffs. Particularly, I like how Meld shows changes on the same lines (highlighing portions of them), it’s editable text pane with source highlighting and ability to visually merge conflicts using arrow icons.

I was not considering Meld as a three-way merging tool, until Tomek Bury pointed out that Meld supports three-way merging. This feature is not advertised on the main page and even in the program itself (help command line output page). More about this later.

Basic idea of three-way merging is taking third merging source into the loop, so instead traditional LOCAL and REMOTE (or MINE and THEIRS if you like) there is additional one: BASE. That’s the parent for both commits in git. Still don’t see the drawback?

For manual three-way merging you need four panes, because you want to see LOCAL, REMOTE, BASE and also the file you will be actually merging. In the git case, that would be:

Typical three-way merging tool shows differences between LOCAL, BASE and REMOTE on the top while offering one additional text pane on the bottom. For example, vimdiff can do this four-pane merging with a little tuning (you need to move merged buffer window to the bottom of the screen). Another great example of this approach is Perforce (p4merge).

Please note workflow is a bit different than in three-pane merging tools - you usually don’t touch the file in the middle (BASE) and edit the bottom (merged) file manually. At least I don’t know any tool that would offer you visual merging of blocks from LOCAL, BASE or REMOTE panes, except vim getdiff and putdiff capabilities. But that is not visual.

If you start three-pane merging tool (e.g. meld, kdiff3 and most of the others), you usually see LOCAL, merging file and REMOTE. What you don’t see is BASE file, how it looked like before it was changed in any way.

Fortunately Meld supports tabs, so you can still see something. I configured my git to start three tabs in Meld. On the first one I see differences between BASE and LOCAL. On the second one I see BASE and REMOTE. And the third one is usual: LOCAL, merged file, REMOTE. The configuration is pretty easy:

This is what I call traditional two-way merge with tabs. Now, since I already noted Meld supports three-way merging, there is another option. When “diff3” git conflict style is set, Meld prints “(??)” on the line showing the content from BASE. In this mode, LOCAL and REMOTE files are read-only which is also handy. Therefore it is possible to configure git to use this three-way merging:

Note --auto-merge option was added in Meld 1.7.0 and it merges all non-conflicting code after start automatically.

You can also use combination of both approaches, because sometimes it’s better to see side-by-side comparison. I call the final setup three-way merge with tabs.

Now how the third approach look like when you start Meld. The first tab shows the changes in the branch I am merging into (e.g. “master”): 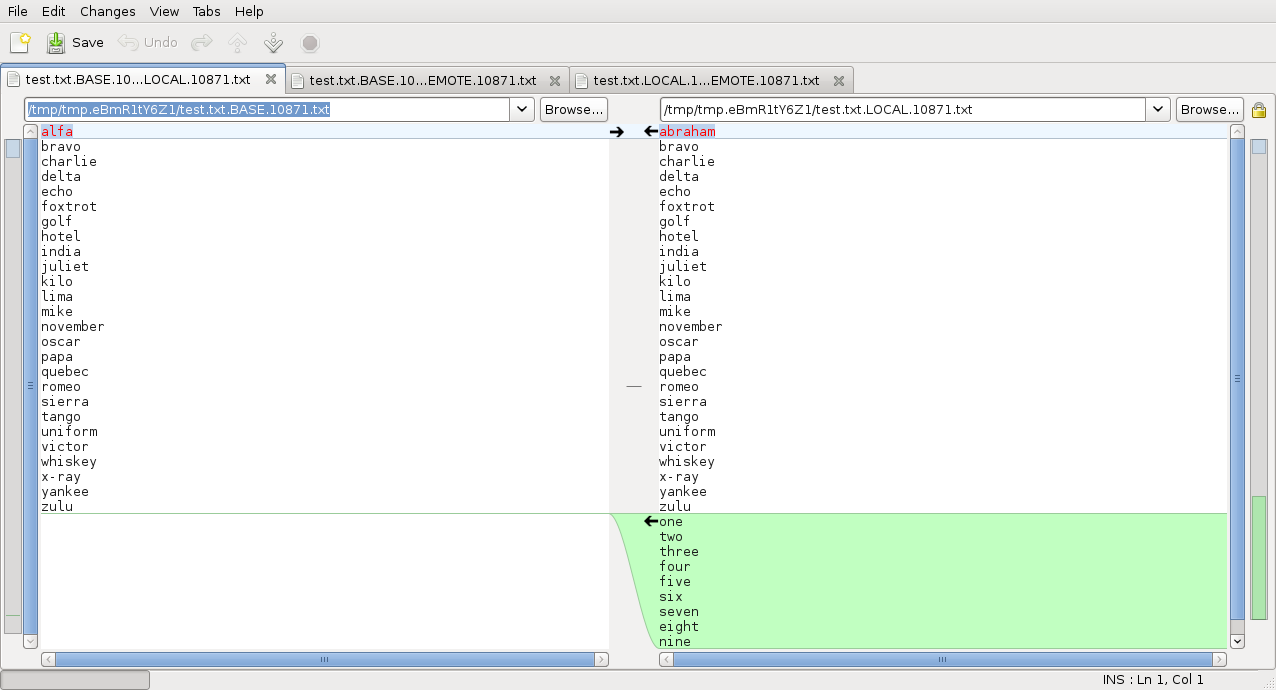 The second is similar, shows changes from the branch I am merging (e.g. “feature” branch): 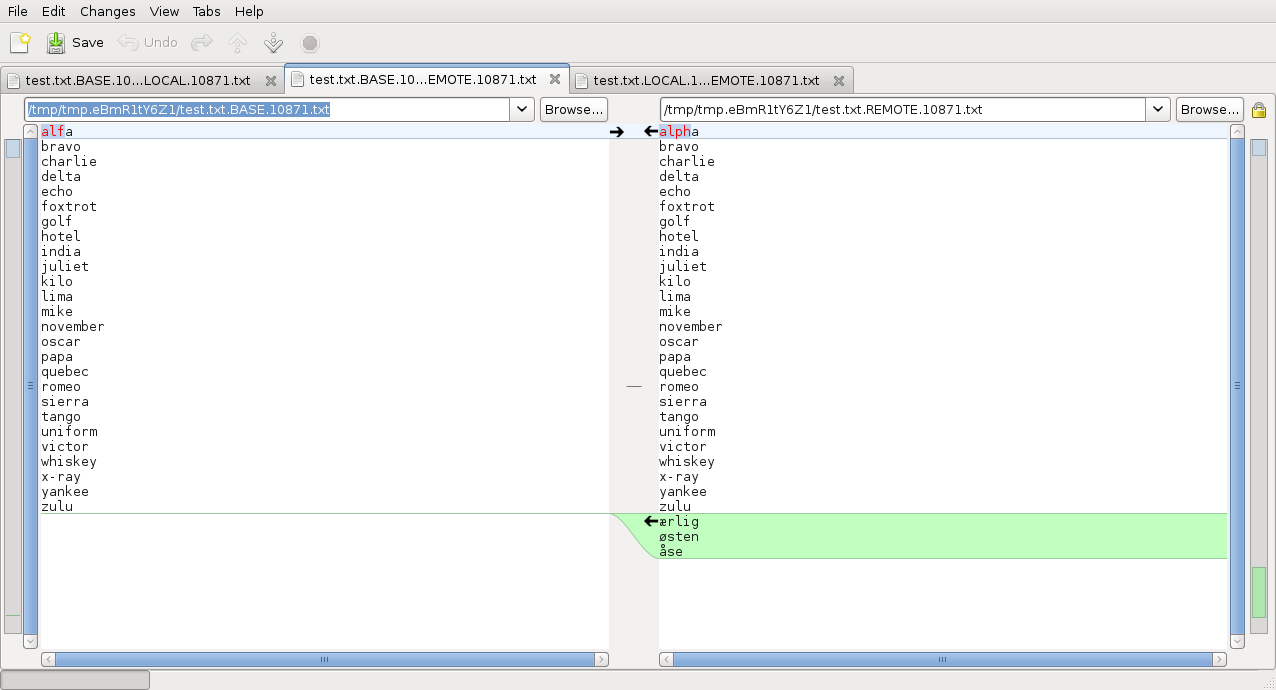 And the third (opened by default) has traditional three-pane layout where I do the work. 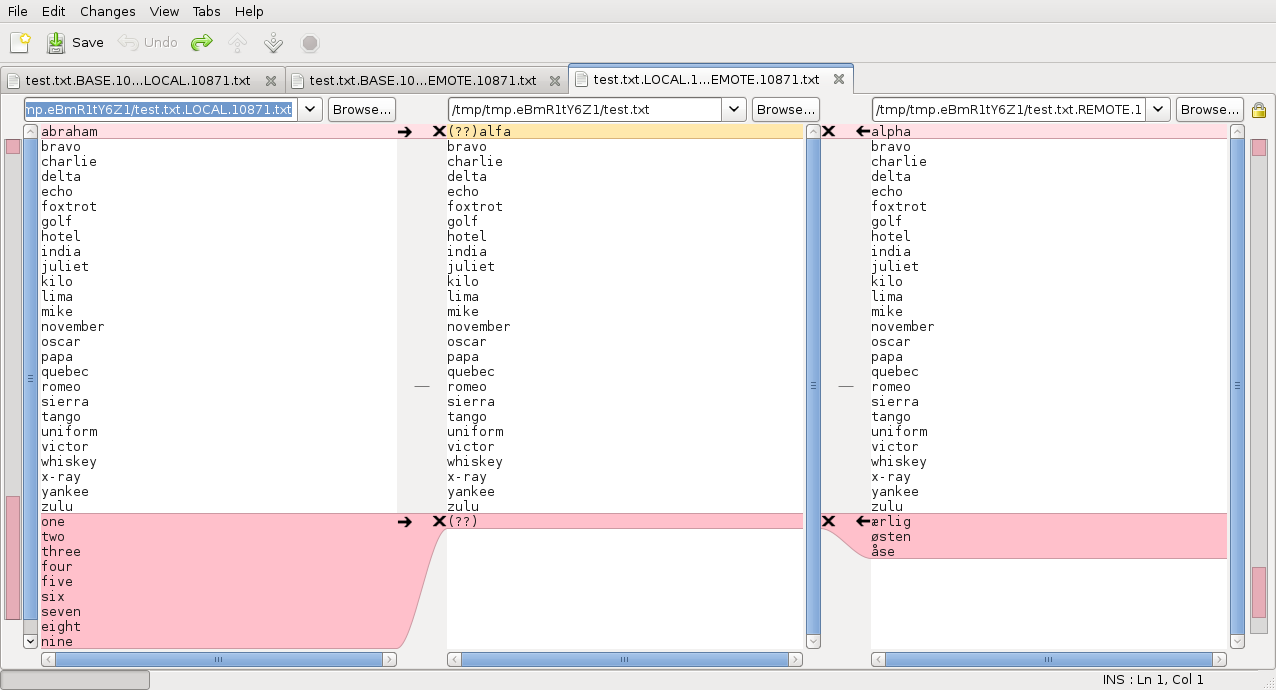 I sometimes use little bit different configuration when I want to see plain git marks in the file that is being merged (the middle file). I have a separate merge tool configured and use it explicitly when I want. In rare cases, it can be faster to manually edit the file in the editor visualizing the changes via meld.

That’s all for today.